May 05, 2014
Things have certainly changed since I was in my twenties.

Today we have a whole series of transgender models in the spotlight representing people like me in the world. They are modelling men and women’s wear or both simultaneously in an androgynous form and doing so while being happy in their own skins.

Besides Andrej Pejic (who I have mentioned here before) there are names like Boris Aprel, Tima Marso, Artyom Eduardovic, Luiss San Murguia and others who are blurring the lines between the genders and, whether it’s for show or part of who they are as people, I am heartened that its becoming more commonplace.

We need better representation out there with the public.

Ru Paul and other drag queens are one group that is well known and represented but they have no investment in a transgender identity. For them it is theatrics and spectacle in representing women in an exaggerated manner.

This group is a little different.

We somewhat saw glimpses of it in the early seventies with the glam crowd but it quickly disappeared. This is not the same but it resembles it in some ways.

What an interesting time to be transgendered. 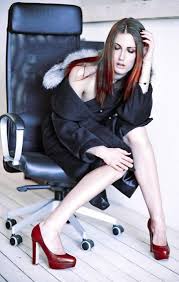