You've got to have friends

May 07, 2014
I suppose it would be nice to have a crossdressing friend that I had a lot in common with and whose company I really valued. I have had no success in the past in this regard which is why I have ended up befriending natal women instead and really quite by accident.

Admittedly it feels good to be accepted by the small group of women that know me and this has helped make some of my outings as Joanna less boring and more social; and since I can’t see myself going to crossdressing meetings with men who don’t know how to dress properly or don’t pass sufficiently well to blend in I don’t think my situation will change soon. Being accompanied by someone who makes me even more of a target will make my time out less enjoyable and potentially more dangerous as well.

I meet these women sporadically for a coffee it and it allows us to catch up on each other’s lives and share some humour or sometimes exchange parental advice. They know me as a divorced mother of two teens which, in the end, is not so much a fib.

I have mentioned in previous posts that I don’t feel comfortable deceiving anyone but it was a challenge at that time to see how effective my voice and presentation could be. Once I got there it was too late to turn back and I admit I do enjoy not having to deal with transgender topics and just be Joanna for a short while with someone who accepts me as another female.

I don’t blame N in the least for not accompanying me and in truth I would have trouble having her see me gesture and speak when I’m in Joanna mode. In that sense, the current scenario works in that I need to dress regularly to stay balanced and happy while she wants and deserves a male lover and life partner.

So we make things work as best we can given the circumstances. 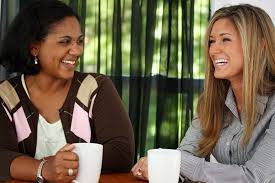