October 01, 2014
Somewhere along the way in my childhood I picked up the idea that displaying feminine behaviour was a bad thing. I can’t remember how it was passed on to me but understanding European culture of the 1960’s it’s not hard to figure out how it could have happened.

I now had this permanent stamp on my psyche which I had to learn to eliminate or hide as much as I could and spent the better part of 40 years doing just that.

As I repatriate the feminine back into my life, I have a new appreciation for all the qualities that reside within me. I believe that I am a good combination of male and female and aside from my crossdressing I don’t think people would see me as possessing too much of the traits of either gender. We are all a combination of both in varying proportions and the idea is to find a recipe that works for you. The problem comes when our particular chosen concoction rubs against the grain of the society we live in or our family's sensibilities.

If you have the fortitude to ignore those messages, then you will have no trouble being true to your own nature; one that perhaps need not reject the masculine in order to espouse the feminine. I am not convinced that a transition should be based on a hatred of one's male anima.

Non-dysphoric people in the world balance their feminine and masculine sides without a desire for transition and many do not fit stereotypical gender roles in the least. Early imprinting or not, perhaps we should be able to do the same.

I think women are wonderful and have admirable qualities that I wish to emulate more. Removing my obligation to appear macho as compensation for hiding a gender issue has made it easier for me to do just that. 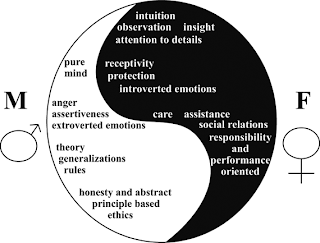