July 01, 2015
The beginning of the second half of the twentieth century saw the introduction of crossdressing social groups which catered to the needs of men who needed to express themselves as women. Society was such that there was no other recourse for these men to employ other than what amounted to secret societies where they could dress and behave as they pleased; far from the prodding and judgemental eyes of the general population and most importantly from their own families.

To the younger generation of today this seems like a strange concept but there was no other way to proceed. Consider that the drag balls of the early part of the century where homosexuals could express themselves in private had been subject to raids and arrests and in many if not most states it was a legal offense for a male to wear women’s clothing. Indeed some of Harry Benjamin’s earliest patients carried letters from the good doctor that they were under his care and supervision and were permitted to be dressed in such a manner. Many of the Jewel Box Revue impersonators (some of which eventually transitioned) were not legally allowed to wear their clothing outside of the performing stage.

Such was the state of affairs in the United States at that time and I suspect only marginally better here in Canada. Therefore it is not surprising that gender non-conformance on the part of heterosexual married men would take to the underground.

Some would attend these meetings only once a year perhaps for a few days. Most often they attended without the company of wives who were completely unaware of their husband’s penchant to behave and dress in this manner. It was a dysfunctional arrangement for all concerned as these men married with the intimate knowledge of something that was deeply entrenched in their psyche since childhood and yet they hoped could be done away with given the right level of willpower. Once having realised this was not possible the only recourse left to them was an escape hatch to relieve the pressure that the situation created. For many these societies were a saving grace.

I doubt today anyone under 45 has any firsthand knowledge of one of these groups. I myself never felt so compelled but I understand why someone would as the support structure they provided could be a great benefit to someone wanting to share this piece of themselves with like minded souls.

Yet there is something sad and depressing about this concept; that one's only recourse might be to join such a group as the only venue to express this important aspect of their personality due to fear of discovery.

These safe houses of the twentieth century are all but disbanded although I know that some people still swear by them. I see that the new generation expresses their gender variance far differently and much more openly than we did and that can only be seen as a good thing.

The other day my newest neighbour and I ran into each other in the subway and I broached the subject of my comings and goings as Joanna to see how he might react as I noted that his son had recently seen me dressed in front of our building. He said that he had also seen me and was glad that I felt comfortable enough to go out in a manner that made me feel happy.

I liked him before and but I like him even more now. 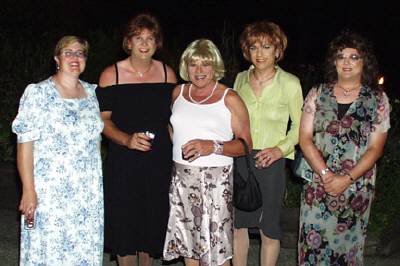