September 10, 2016
I was listening to CBC radio recently and the topic was on the subject of moral panics.

A moral panic is essentially a type of urban myth in the form of a warning to the dangers of exposing ourselves to certain situations. This is mostly often used on the young to teach lessons.

For example recently on the internet there have been reports of clowns in the woods of South Carolina showing up out of nowhere and scaring the bejesus out of people. This particular story is unsubstantiated but it has been propagated extensively. Its veracity is less important than the fact that it is being taken seriously by parents worried about the safety of their children.

Clowns just have that history of instilling joy as well as fear in children and they represent an almost paradoxical figure.

Well wouldn't you know that the right in North Carolina has been using a similar technique to scare people into supporting the HB2 bathroom bill. By showing the public pictures of very masculine and gaudily dressed men in women’s clothing (looking very much like those clowns) they warn parents of the impending doom of allowing trans people into women's bathrooms.

With the lightning speed that social media spreads these stories whether true or not have more likelihood of being accepted as being genuine. In other words, the quick access gets the largest number of uneducated and susceptible people to buy in to a myth in order to instill the maximum amount of fear.

Turns out that clowns have just that right effect on people. 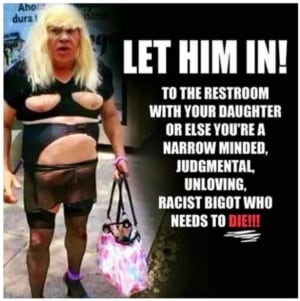