August 14, 2017
Christopher Nolan has created a cinematic feast for the senses.

His film Dunkirk flows along with long periods between speaking parts and with the continuous hum of a Hans Zimmer score that marks the tension perfectly. This is a great film which will be nominated for best picture and possibly win it all. When the ending credits began to roll I knew it then.

This movie breaks with war movie convention and delivers most of its impact through its expansive cinematography, soundtrack and actor's faces which mark the desperation of the situation with just the right level of angst along with their minimal but strategically placed dialogue. It draws you in and does not let up allowing you to be more involved than you had expected. I was riveted the whole time and that's what great film making is all about.

There is no one hero in this movie although one does stand out a little more. They are just people put under very difficult circumstances doing their best to survive.

Last year it was Denis Villeneuve's "Arrival" which had my Oscar vote and this year it will be "Dunkirk". 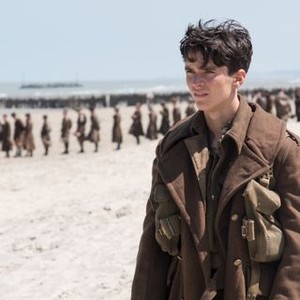