I appreciate how women communicate

August 15, 2017
“Oh my God I love your bracelet!” said the Starbucks barista. She is a young woman in her twenties.

The other one comes over and says much the same and suddenly the three of us are talking and it just flows. The latter proceeds to tell me things I know I would have never heard as a male.

For the record the bracelet was an $11 find at the Toronto Eaton Center and had called out to me with the price making it an easy sell. Like some costume jewelry, it looks like it’s worth much more which is a bonus. Later that day I got another comment from another vendor who pointed it out how much she liked it.

Being on my own here and spending more time as Joanna has made things less lonely if nothing else because of the openness that women have and my own impetus to oblige them in conversation or start one myself is part of that. It is very comfortable and the reflexes are there and don’t require any special prompting in order to surface.

As a side note, that same day I decided to wear my feather drop earrings which I had bought some time back but hadn't worn very much. However I think they will get more use from now on. 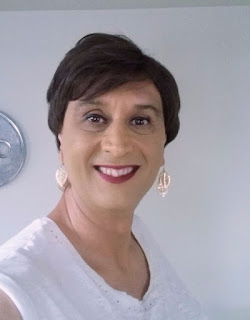