a lesson in pragmatism

September 17, 2017
As a transgender person trying to figure myself out I needed to test my mettle in the world. So while dressing at home in my mother’s clothes when I was young was sufficient for a time, I would break out of those confines in my early 20's.

For me it wasn’t about standing out in the crowd and being admired but simply testing whether I could blend seamlessly into society (at least only as well as a woman over 6 feet can).

Besides, dressing in lingerie and sky high heels and staring longingly into the mirror wasn’t me and it is how I eventually determined that I leaned much more towards transsexualism than someone who merely got a sexual buzz from dressing. This part took a while to figure out and was intermingled with numerous purges and much soul searching.

But blending needn’t mean frumpy and my sense of style wasn’t going to be dampened by an attempt to pass by wearing sweat pants. Besides, this has much more to do with confidence than anything else. Now that I have tested myself on more occasions than I can count I can go about my business and not worry about how I am being perceived. Which means my style is now a blend of pragmatic and feminine because spending 4 hours or more in the wrong shoes will teach you a valuable lesson.

The other day I waved a young waitress over while I was having dinner (she was dressed much like the woman on the far right in the photo below and maybe 21) and marveled at the fact that she was wearing very pretty but impractical thin heeled pumps during her shift.

"Yes 7 hours and my mother tells me the same thing. She says my feet will be mangled by the time I'm her age. But they do make our legs look great don't they?" As she pointed to her feet.

"Yes they do and when I was your age I was more suited for it too" I said.

I was wearing my pumps that night as well but I wasn't going to need to work in them and I am more than certain I wouldn't be able to. But then that's what twentysomethings are for. 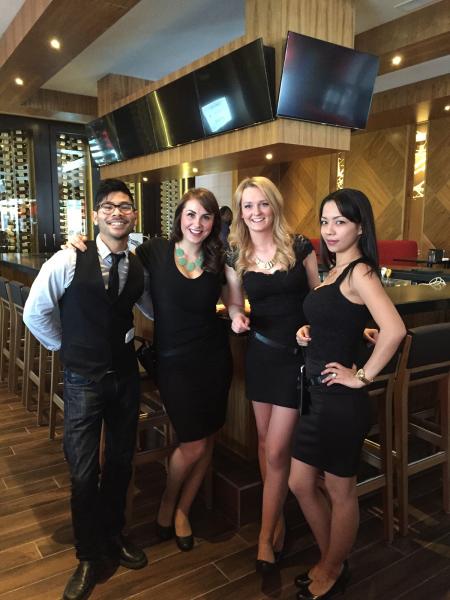