March 06, 2019
Harry Benjamin had seen his fair share of patients from all over the gender spectrum, and in his 1966 opus "The Transsexual Phenomenon" he wrote the following paragraph which expressed his befuddlement over the hierarchy that many created for themselves with no basis in anything solid:

“Too many individuals are that way; what they do not like must be forbidden and punished. Then they are satisfied. I have even met transvestites who dislike (or pretend to dislike) transsexualism so much that they are against estrogen treatment and operation (for reasons of self protection?). There are also transsexuals who dislike transvestites as well as homosexuals. Intolerance can be found in strange quarters.”

I admit to being confused by this as well and, considering we know so little about the origin of trans identities, it begs the question as to why some would feel the need to discriminate against others. Of course, fear is the great motivator of humanity and when we feel threatened we lash out. But if we feel secure in who we are, what possible use would we have for comparison or judgment? 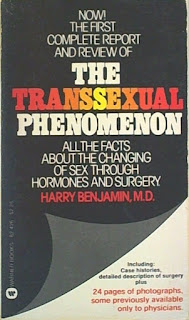