Showing posts from June, 2014
Show All

the search for legitimacy 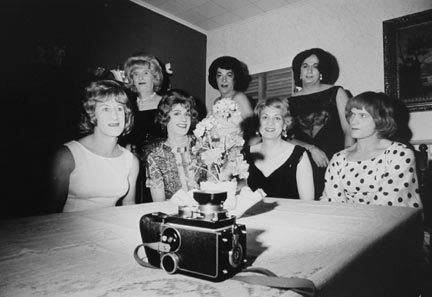 Fetish versus identity. This is the key issue at the core of it all. Yes I know I have dealt with this many times before but this a kind of synposis. Late transitioning woman-loving transsexuals tagged by Ray Blanchard as autogynephilic are, according to his theory, driven by a love of self as woman. They are men suffering from target location error. But let's look a little deeper at this hypothesis. Most gender dysphorics understand there is something different about them between age 4 and 7. They begin to fully or partially identify with female things (clothing, activities, etc) and are also typically dissuaded from doing so by their families. This is well before the age of sexualisation and often comes without encouragement of any kind from outside forces.This is our first hitch because advocates of AGP theory need to be certain that sexual fetishes can develop in children as young as age three. We also know that as dysphorics age their association with a self perceived fe
Post a Comment
Read more

Happy in your skin. Simple isn't it? Well yes and no. In the end that is all that matters and after all the reflecting and thinking that is the ultimate objective is it not? You are living day to day and you need to function and be relatively content with who you are. No life is not perfect and the many challenges will come our way but if you are armed with self awareness and love for who you are inside you can manage quite a lot. Being happy in one's own skin can take a very long time and since we all carry baggage it can be at times daunting to get there but that is what is required of us if we are to be loving partners, parents and employees. Dysphoric or not, we all need to find the core of what makes us tick. Whether it be through spiritual means, meditation or psychological treatments we need that reflective time for self examination and study. Out of that work will come a whole human being. Getting there opens the pores of the mind and heart and allows you to
Post a Comment
Read more

some of what I have learnt thus far...

When I was trying to understand myself and where I fit into the gender spectrum I spent a lot of time researching and reading. My research included the work of Ray Blanchard and Anne Lawrence and their theories on autogynephilia which in turn led me eventually to Jack Molay’s wonderful Crossdreamers site where I found many interesting comments and stories from people very similar to myself.. One of the aspects that I learnt that I did not know before was that non crossdressing dysphorics and non dysphoric but AGP identifying posters mentioned that they read TG fiction and/or viewed imagery. Having never done this myself I could not relate but it made sense to me that a person desiring in some way to identify with or be the other sex (even temporarily) would need an outlet for their feelings. I have come to conclude that the curiosity about what it might be like to be the opposite gender is not all that uncommon. I think many people flirt with the idea and go through phases in their
Post a Comment
Read more

Public transit is a good barometer for me as to how well I am blending in. I used to be petrified of taking the bus or the subway as Joanna for fear I would be read and harassed or just plain stared at in derision. So it took me quite some time to work up the courage to finally face my fears over this self imposed taboo and go for broke. There were the times when my trepidation was confirmed and someone would notice me but then the nervousness and discomfort which were plastered on my face were blatantly noticeable. I was not helping myself at all. It took me a while to learn to relax and the more I did so the less I was being noticed or read. Nothing in my presentation had changed save the most important element: my self confidence. This simple litmus test confirmed that I was really getting somewhere with my public personna as Joanna. Now I don't give taking the subway a second thought during the daylight hours now and it's given me more options for getting to place
2 comments
Read more

our male and female identity

In his practice, Harry Benjamin noted that there was a progressive nature to the transvestism (and I use the historical term here) of many of his patients. Some were clearly transsexuals in denial but even for those who were not, many progressed over time into living and behaving in more authentically female ways. We have examples like Katherine Cummings, Virginia Prince, Susanna Valenti and even more currently the husband (now wife) of Helen Boyd who first identified as a crossdresser. Certainly when Helen wrote her first book in 2003 that was the case but things changed slowly over time. In all of the examples cited, the person went on to a full or partial physical transition and full time living as a female. Is gender dysphoria rooted in an inherent and prewired full or partial female identity? I believe the answer is yes. The burning question however is not whether such an identity exists. The more pertinent question is: understanding that there is some level of innate “fem
Post a Comment
Read more

- June 25, 2014
For the first time in my life I am happy with both my male and female presentations. Yes there was the inevitably journey to mental peace about how to deal effectively with my dysphoria but along with that came the work to achieve a physical presentation that would allow me to comfortably go out in public with a certain degree of confidence and comfort. At present, I feel I have developed a style of clothing and makeup that works for me. It is age appropriate, not overly flash but not dowdy or matronly either. It is a palette that has taken a little bit of time to develop and it has happened in tiny steps; as all good things do. Because we are not trained from a young age as females, it takes us a while to develop a look that is uniquely our own and works for our body type. Everyone has colours and styles they favour but that does not mean we can pull them off nor should we try. When you find something that works you know it. Clothes fit better and you look yourself up and down
2 comments
Read more
More posts