- August 06, 2014
I wanted to continue with the theme of letting go but also touch on the idea of vantage point.

Everyone has a vantage point from where they see things. We review the world around us and see behaviour that pleases or displeases us and that filtering process is made in large measure by the way we were socialized. The biases that we buy into without question are often ideas that have been implanted.

I like to think of that as a coordinate system and from the vantage point of those axes we measure everything we see, hear and experience.

Over the last few nights I have been watching the PBS series on Mark Twain’s life and what struck me most, besides his extreme resilience in the face of such personal tragedy, was his disdain for slavery and mistreatment of all aboriginal people of every origin. I had seen this program before but I was once again drawn into its spell as it was so well produced and researched.

Samuel Clemens was well travelled and had seen most of the world and he was endowed with a keen ability for observation and social commentary. His prolific writing and lecturing provided him with great wealth but at the same time he squandered much of it through grandiose schemes and building lavish houses. He was, like many of us, a conflicted person; full of great talent but invariably human and flawed. The show takes you on an in-depth journey into his writing and quotes him extensively and one can sense in his wry and folksy humour the unmistakeable traces of melancholy.

How does all this relate to the idea of vantage point?

So much of what we experience in life is mired in tonal greys and it is sometimes difficult to gauge against an absolute grid. The things that people find immoral or reprehensible are so much attached to the period and the place. One of the still photographs in the Mark Twain program shows young boys attending the lynching of an African American man. Some stare into the camera almost grinning and we are left with a portrait that leaves us jarred and affected and yet was reflective of time and place. This is something that today we see as an absolute moral wrong and yet it is captured for posterity being celebrated by a mob.

When I look at my own life I realize as I age how much I am endowed with predetermined ideas which have coloured my own thinking process. Separating the objective and absolute from the tonal grey is sometimes challenging now so imagine how much harder it is for a young person trying to start their life.

The challenge we have as people is to tweak our level of discernment to filter out the wrongheadedness of the period we live in and find our own path. Life is challenging and short and full of traps that can take us off course.

As I watched the life of Mark Twain displayed in great detail before me, I was filled with the sense that we are all prone to greatness as well as weakness and in that humanity we must make our way through the joys and challenges of life. 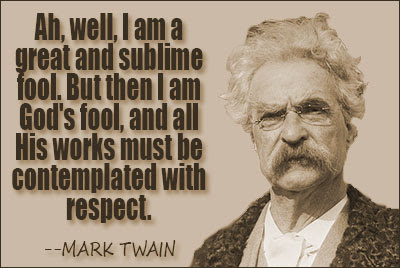