October 27, 2014
The following is an excerpt of Chapter three of the book entitled “Clinical Management of Gender Identity Disorders in Children and Adults” by Ray Blanchard which was published in 1990. The chapter, called “Gender Identity Disorders in Adult Men”, describes the condition of Gender Dysphoria in heterosexual males. What is particularly interesting to note is how, like Harry Benjamin, Blanchard illustrates how difficult it is to distinguish between pure transvestism and transsexualism in some patients (Benjamin's type IV) and how both conditions may be related or one can progress to the other.

While I have always had my reservations about his Autogynephilia theory and still do, this chapter describes very well my own life plus the difficulties inherent in making an accurate diagnosis in this area. I presented for treatment at the age of 44 instead of his average age of 39 years described below:

Heterosexual gender dysphorics may be defined as men who, although they are sexually attracted to women, nonetheless strongly desire to become women themselves to be rid of their male genitals and live pennanently in society as females. It should be noted that the DSM type labels, heterosexual, homosexual, and so on, do not change according to the individual's current surgical status or cross gender convictions. Thus, a surgically reassigned male to female transsexual living as the lesbian lover of a biological female would still be classified as a heterosexual transsexual.

The early histories of heterosexual gender dysphorics resemble those of transvestites: most take part in normal boys' activities without outward signs of effeminacy, and most experience sexual arousal when they first begin cross-dressing. There are also many external similarities in early adulthood: heterosexual gender dysphorics tend to work in male-dominated occupations. and the majority get married at least once. When they are not deliberately feminizing their attire, their anatomy, or their presentation, they are unremarkably masculine in demeanor and appearance.

External differences between transvestites and heterosexual gender dysphorics typically start to appear when these men reach their early 30’s. This is the average age at which cross-gender wishes begin to escalate in the latter group. From this point, heterosexual gender dysphoria resembles a progressive disorder that sometimes goes into remission. The exact course of this escalation varies from person to person, depending on individual circumstances and personalities. In some, for example, the first indication of this process is an increasing desire, on the part of a man who had previously cross-dressed only in private, to be regarded by other people as a woman. In the majority of cases, an increasing frequency of cross-dressing is accompanied by a decreasing tendency to become sexually aroused by this activity.

The desire to go out cross-dressed initially creates great feelings of conflict in heterosexual gender dysphorics. Many have realistic fears about their ability to "pass" as women; others fear having their anomaly discovered by their families, friends, or colleagues at work. A common compromise is going out in women's attire for a solitary walk or drive, usually late at night when there are few people around. As the individual gains confidence, he eventually attempts to pass among strangers, for example, in a shopping mall.

Whether or not he overcomes his fear of going in public crossdressed, the heterosexual gender dysphoric is increasingly confronted with another, more serious problem: the frustrating conflict between his desire to live as a woman and his reluctance to abandon his wife, children, or career. This is the point at which these patients typically present for treatment. At our clinic, their average age at initial presentation is around 39 (Blanchard 1988). This is about 13 years older than the average male or female homosexual gender dysphoric (Blanchard et a1. 1987). At the time he presents, the heterosexual gender dysphoric may have already resolved to pursue sex reassignment, or he may be just asking for help to go one way or the other.

As I have previously indicated, the course of heterosexual gender dysphoria is highly variable, and this is equally true of its outcome. In some cases, an episode of acute gender dysphoria subsides spontaneously or else responds to psychotherapy, and the individual continues his life largely ashe was before.

Another group, called marginal transvestites by Buhrich and McConaghy (1979), resolve their gender identity conflict with a specific request for partial feminization, usually moderate breast enlargement by means of estrogenic hormones. In many instances, the individual has already decided on this course of action before he presents to the clinician.

DSM-III-R does not include a separate" diagnostic category for such individuals. In this revision of DSM, they would probably be classified under the heading of gender identity disorder not otherwise specified. Marginal transvestites give various reasons for their requests. Some indicate that having a vagina is simply not that important to them; others indicate that they are unwilling to suffer the diminution in sexual responsiveness associated with vaginoplasty. Still others state that, ideally, they would like to live full-time as women and undergo complete sex reassignment, but that they are prevented from doing so by prior commitments to wives, children, or careers. This last rationale undoubtedly has some truth in it, but it also seems likely that marginal transvestites, as a rule, are less strongly driven by gender dysphoria than full-blown transsexuals.

Many heterosexual transsexuals hope that, after reassignment surgery, they will find themselves attracted to men and settle down with a male partner. Surgical sex reassignment has little impact on their sexual preference for women, however, and postoperative patients are equally or even more likely to become involved in lesbian relationships with biological females.

The various similarities between transvestism and heterosexual transsexualism suggest that these conditions may be basically one and the same disorder. This notion is reinforced by the fact that many cases of heterosexual transsexualism seem to have developed out of transvestism. This apparent progression was described in memorable, if somewhat lurid, terms by Lukianowicz (1959): "a hitherto typical case of transvestism becomes acutely disturbed, ... turns, as it were, malignant, and degenerates into a full-blown picture of transsexualism with its gloomy prognosis" (p. 52). 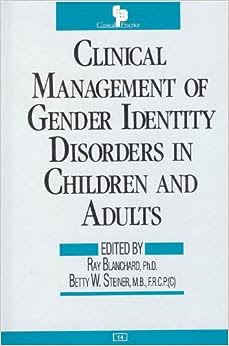