October 02, 2014
Amanda is a young woman in her early twenties who works at a cellular phone kiosk situated next to the coffee place I frequent at my local mall. In the past, we have exchanged chit chat which was first initiated when one day she commented very positively on something I was wearing. She knows me only as a woman.

She seems to be a genuinely nice person and I have noticed that she treats her customers very courteously.

Last week she seemed a little despondent and after greeting me I asked her what was wrong. She sat down next to me and shared the news that she had broken up with her boyfriend.

I began consoling her a little and sharing some of the comforting thoughts that someone my age can impart on someone who is only a few years into adulthood. Without going into the details of what I said to her, I will say that it felt rewarding to be able to have this exchange with her as Joanna. Had I been in male mode, this may not have happened and it was nice to have been able to help someone while drawing from my female anima by being nurturing and kind to this young woman. Regardless of our gender, people my age do have occasional words of wisdom to impart which is one of the few fringe benefits of ageing.

After our talk, she very genuinely thanked me for making her feel better and building up her esteem if for just a few minutes and I went home glad for an exchange which made that evening’s outing just a little more special. 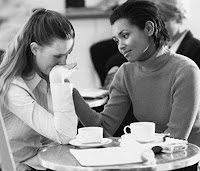