the wrong kind of ministry

“Learning to accept our body, to care for it and to respect its fullest meaning, is an essential element of any genuine human ecology. Also, valuing one’s own body in its femininity or masculinity is necessary if I am going to be able to recognize myself in an encounter with someone who is different. In this way we can joyfully accept the specific gifts of another man or woman, the work of God the Creator, and find mutual enrichment. It is not a healthy attitude which would seek “to cancel out sexual difference because it no longer knows how to confront it.”

This is all very good and fine but it was written by someone who does not know the first thing about gender dysphoria. This is a constant problem that we encounter with people who pronounce themselves on this issue at every level of society.

To speak in this way makes the basic assumption that transgender people make a conscious choice to be the way they are which is patently false. Those who read my blog know that I do not advocate gender reassignment surgery as a first course of action but I do understand that for some people this seems to be the way to a healthy and normal life. But I suspect that the rest who do not alter our bodies surgically but perhaps take hormones in order to help temper their dysphoria are probably also not going to fall into favour with the Pontiff.

Whether society likes it or not about 1 to 2% of our population has gender identity issues. It might be really helpful if people who understood nothing about this issue first hand stop turning this into a moral question because it is not.

Telling these people to suck it up and put up with their situation might make for good church policy in principle but in reality it screams of discrimination. Instead they should be ministering to them without making judgments.

After all, this is not something you can catch or spread and happens to only a small sliver of the general population. The Catholic Church policy seems to be saying: if we accept what these people are doing then what next? There goes the rest of the neighbourhood?

As a transgender person who was raised Catholic I would like to see a change happen here even if I know it will take a long time. The position on homosexuality for example is love the sinner but hate the sin. Again there is the presumption that this is a lifestyle choice that one is making rather than an innate way of being.

These rules are not divinely sourced but are the product of an interpretation made by human beings so I take it all with a grain of salt. But it would be nice if the policy of these churches were more in tune with trying to be inclusive and understand what these people go through rather than tie them in with having a lack of moral rectitude.

I am past caring about these things because I am older and can see through these issues, but for some young transgender people born into strict religious households this can become an issue of life and death. Leelah Alcorn comes to mind as a recent example.

Now please take a few minutes and read Mark Morris's rebuke of Alberta Catholic school trustee Larry Kowalczyk's statement about transgender students having a mental illness. Mark is the son of celebrated writer Jan Morris who herself transitioned in 1973 and wrote the book "Conondrum". It can be found here. 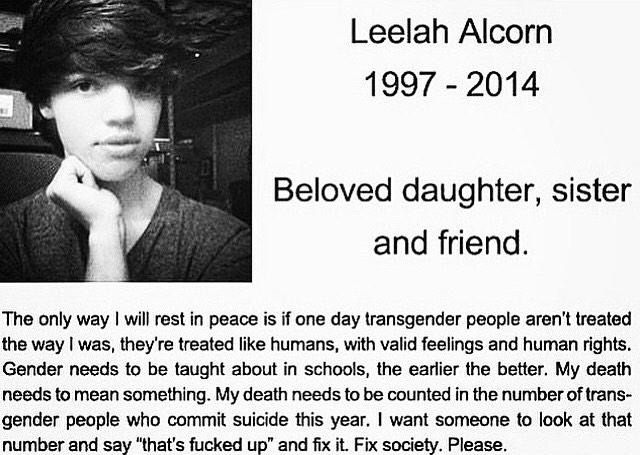