October 22, 2015
Womanless pageants seem to involve two distinct types of participants. One is the archetype of the macho male who is a good sport and clearly does not want to try too hard while the other is the almost feminine and convincing type who could almost pass with just a little more effort.

Both are representative of what is found in the male population. After all just like women are not all girly and feminine not all men are overtly masculine either. To some degree we all play a game so that we can be seen to fit within the confines of expectation.

The macho type will wear flip-flops and won’t bother shaving their legs while the feminine ones do shave plus wear the latest fashionable heels. It’s interesting also to note that within a given pageant you rarely see both extremes; in other words some regions, causes and/or age groups put on different types of pageants which either make a comic mockery of femininity or at the other extreme almost celebrate it.

Some men clearly feel ashamed and awkward while there are those who are almost comfortable and unassuming about it.

The psychology of all this is fascinating because there has been so much stigma around the male role in western society. To be seen as being feminine is to be weak and ineffectual. After all, this is what nature requires: a comforting and protective male who does not show any frailty.

Women laugh in the audience or squeal when they see their classmates or work colleagues come out in a dress. Is this because they think these men are demeaning themselves? why is it so amusing to them? there is definitely some intriguing and very basic human psychology going on here. It's clear in my mind that if the pageant roles were reversed the contest wouldn't hold the same interest or have the same impact. Its for this same reason that women can wear an outfit consisting entirely of male apparel and have no one question their gender identity.

Interestingly, these pageants seem to take on their best forms in the southern States which is also where the womanless wedding was born. Is this because these regions were more respectful of the grand dame of the household perhaps? It is hard to know.

When I was young the last thing you could have done was put me in a dress in public; even if I secretly desired it. I recall needing to go to a Halloween party in my early 20’s and searching for last minute ideas. When my mother suggested that I borrow some of her clothing I balked at the idea instantly. Of course she had no clue back then about my situation and how I had raided her closet from a very young age.

As we redefine what it means to be a man and a woman in this new age I can see the walls of convention crumbling. Some of these young men now don dresses and then comfortably go back to their male identity without the slightest hint of self-consciousness.

I for one am glad to see it. 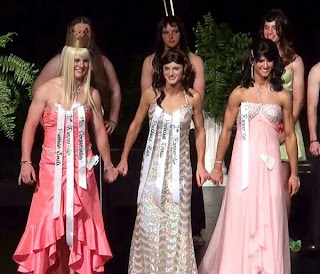