- September 04, 2016
Free market capitalism only works within a restrained box and even then only in theory.

When the United States negotiated NAFTA with Mexico and Canada it was supposed to open up markets for companies, facilitate cross border movement of goods and services between Canada and the States and help stabilise a failing and fragile Mexican economy and government. It seemed a relatively good deal for al and even helped raise the wages of very poor Mexican workers.

So when Donald Trump rails against Mexicans and threatens to build a wall he negates to mention that net movement between the United States and Mexico is for all intents and purposes zero. This is because some Mexicans are going back to their country to find better job situations. In other words it's a smoke screen.

Trump’s base is mostly composed of white, less educated males who are receptive to xenophobic hysteria but the real message to take from the failure of the U.S. economy to find balance is income inequality.

When U.S. companies began opening up shop in places like Bangladesh and Indonesia it created even more unbalance since the American worker was now facing even more global competition. Let's also not forget that by allowing cheap Chinese goods to enter the west it allowed for more job loss because people just couldn't get enough cheap stuff that they didn't need. As a result we increasingly became a culture of consumers.

The other elephant in the room has of course been technological advancement where far less workers are now needed to build things. When you couple that with a trickle down economic myth that went bust, Republicans are faced with having to explain why that top 1% keeps getting richer.

Meanwhile we continue to sit on a ticking economic time bomb which that 1% doesn't seem all that concerned about. 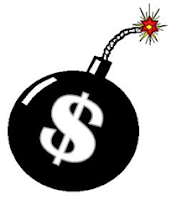