- January 25, 2018
This story by Graeme Hamilton appeared in the National Post and it's about a transgender woman stepping into TERF territory..

"Gabrielle Bouchard began her term as president of the Fédération des femmes du Québec with a call for women’s equality, echoing the demands of leaders of the province’s main feminist organization going back to its creation more than 50 years ago.

But a month into the job, Bouchard has faced a backlash over what sets her apart from her predecessors: that she was born male.
As the first transgender woman to head the federation, Bouchard’s ability to speak for women has been challenged by some feminists who portray her gender transition as a lifestyle choice.

“Is a trans woman a real woman?” asked the headline above one Journal de Montréal column. “Being a woman is not a choice or an identity,” the head of a splinter feminist group wrote in another column critical of Bouchard’s election.

Bouchard, 49, said she did not expect her arrival as president to stir such controversy. “I had to realize that it is a big deal, because we are still at a point where we tolerate some identities, or we tolerate some people who are at the margins . . . as long as they stay where we believe they are supposed to be,” she said in an interview.

“If women are going out of the places that we create for them, then we start to see a backlash.”

Disagreement in feminist circles over the place of trans women is not new. In Canada, transgender woman Kimberly Nixon lost a long court battle in 2007 after a Vancouver rape crisis centre refused to let her work as a counselor because she was not born female.

It's not enough to say, 'I feel that I am a woman, so I can speak in the name of women'

In the United States and the United Kingdom, tensions occasionally flare between trans activists and a fringe of radical feminists who insist on regarding transgender women as men.

Last year, the Nigerian author and feminist Chimamanda Ngozi Adichie stirred controversy in an interview with a British TV network in which she argued that the transgender experience should not be “conflated” with women’s experience.

“It’s about the way the world treats us, and I think if you’ve lived in the world as a man with the privileges that the world accords to men and then sort of change gender, it’s difficult for me to accept that then we can equate your experience with the experience of a woman who has lived from the beginning as a woman and who has not been accorded those privileges that men are,” she said.
Bouchard said the response to her election as president illustrates that feminism is not a monolithic movement, and not all feminists are free from prejudice.

“It’s plural. It’s diverse. There are many movements,” she said.

“There are parts of our society that are anti-immigration. There are parts that are racist and Islamophobic. These will be reflected in the feminist movement. The movement is no different from the society in which it lives.”

The assault on Bouchard’s leadership was led by columnist Denise Bombardier, who wrote that the goal of trans activists is to “smash the reality of the two sexes to impose an appalling vision where neither man nor woman would exist any more.”

Diane Guilbault, who broke from the federation in 2013 and founded the organization Pour les droits des femmes du Québec, said it is one thing for Bouchard to advocate for trans rights, as she did in her previous job at Concordia University.

We tolerate some identities, or we tolerate some people who are at the margins ... as long as they stay where we believe they are supposed to be but for her to speak on behalf of Quebec women is a step too far, Guilbault said in an interview.

A few people have publicly come to Bouchard’s defense. Transgender actress Gabrielle Boulianne-Tremblay wrote a Facebook post accusing Bombardier of invalidating Bouchard’s identity as a woman and fuelling “hatred toward a community that is only asking for the right to dignity and respect.” University student and LGBTQ activist Marie-Pier Gosselin asked critics to judge Bouchard on her accomplishments as president, “not on the basis of the gender she was assigned at birth.”

For the most part, though, Bouchard has been left to defend herself. She scoffs at the notion that her life experience does not qualify her to speak for women. She prefers not to discuss the specifics of her transition, saying it occurred when she was an adult and was “not a walk in the park by any stretch of the imagination.”

She believes the experience provides unique perspective on women’s struggle for equality. Before her transition, she enjoyed a position of relative privilege above the glass ceiling, she said.

“Then I found myself below that ceiling after transition. In a way, I think that I have an advantage because I’ve seen both sides. I’ve experienced marginalization, even though people say I didn’t.” 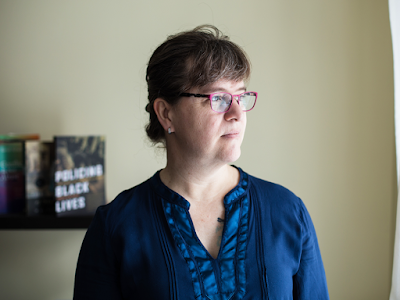