- April 10, 2019
Right of center parties are gaining foothold as the backlash against globalism expands.

The great migrations from Africa and the middle east into Europe are helping fuel xenophobia as is the Latino surge into the United States. With Netanyahu's right wing Likud party victory, we can add another militant force to the mix and an attitude that threatens to take over the West Bank by force.

In Brazil there is also now the odious Bolsonaro who is a Trump clone both in posturing and in extremist policy although not in level of idiocy.

The world is facing a dark period until we learn to all get along and dispense with the hatred. But as long as fear of the unknown is the big motivator, people will be manipulated by right wing despots who appeal to the emotion more than they do the mind and we all lose when that happens. 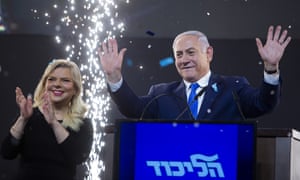