one hell of a guy

- April 23, 2019
Scottie Madden had that same marking incident at 4 years of age which I did; someone yelled at her for wearing the wrong shoes. A lot has happened to her since then...

"Scottie Madden made one hell of a guy.

Tough, outdoorsy, a dedicated son, big brother and husband. He led a reality TV crew that took a former Navy SEAL, a Green Beret, and an RAF instructor into some of the harshest environments on earth.

But there was a problem. Scottie Madden may have been born a boy, but he felt he was supposed to be a woman.

At 47 years of age, he was done living with that secret.

At 5 a.m. one morning, Scottie woke his wife Marcy and told her everything.

“I don’t know who I am,” he said. The words just tumbled out.

Scottie knew that she was supposed to be a girl at a young age. But she also learned young that her true identity wouldn't be accepted.

“I was 4-years-old and the babysitter was babysitting me and the little girl next door, and it was raining,” Scottie recalled.

“She had these fantastic pink rain boots. And I had just the traditional firefighter ones with the yellow tops," she said. "We traded.”

But then the babysitter walked in.

“The next thing I know, the babysitter is shrieking at me, ‘You can’t wear those, those are for girls,’” Scottie said.

Scottie was confused. Yes, the boots were for girls, but wasn't she a girl?

So she learned to bury the desires and the feelings that her body didn’t match who she was. And she focused on being a great boy and a great man.

“I went through my entire life building this dungeon that I then imprisoned myself in,” Scottie said.

Her attempts to suppress her true identity would sometimes fail and for several days her mind would wander – she’d let it go there. She’d fantasize about being a woman, pulling her hair back into a pony tail, wearing earrings.

And then reality would come crashing down and the realization that this could never happen, that she could never be a woman, was unbearable. So she'd bury her shame and carry on with life as a man.

It took nearly 50 years for Scottie to get to a point where she could no longer suppress her female identity.

Coming out to her wife Marcy was a huge step. And it dropped a bomb on their marriage.

“You would think, I’m this close to this person, I’m going to detect something. But I had absolutely no idea," Marcy said. "We ended up being married for 20 years before she even tried to talk to me about it at all.”

And when Scottie did talk to her about it, denial kicked in.

“I was pretty good at staying in denial,” said Marcy. “You know, this can’t be, or it’s an imbalance of some kind. I sent her to our homeopath to get a remedy.”

Marcy had seen this situation play out in movies and on TV, but she never imagined it would happen to her.

On the screen she'd see a happily married couple, and then the husband tells the wife he’s transgender. The wife gets on board and suddenly she’s helping her partner dress as a woman and put on makeup.

“And I just thought, I could never do that,” Marcy said.

And there was a feeling of betrayal, like somehow their marriage to that point had been a lie. But then Marcy started to realize something.

And suddenly Marcy was helping Scottie with her eyeliner and they were sharing makeup tips. And Scottie was finally living as herself.

And she was so grateful for that.

“Marcy never saw this coming," Scottie said. But "she worked at staying in love instead of letting it repulse her or saying, ‘Well, I don’t understand it’ and walking away,” Scottie said.

So Scottie stopped trying to protect Marcy from the real her. And it brought them closer.

“We had a very open, very honest relationship, but now we have even more because she has actually been able to come in," Scottie said. "She’s now seen every corner of my heart.”

It’s been about six years since Scottie woke Marcy that early morning. Life isn’t perfect. They still face the challenges of being transgender, including employment discrimination.

But they’re happy. And, although their situation may seem unusual, they say that it doesn't have to be.

They want couples of all kinds to dig a little deeper, remove the masks they wear in front of their partners and, as Marcy puts it, “Remember that this is the soul and the being you fell in love with.” 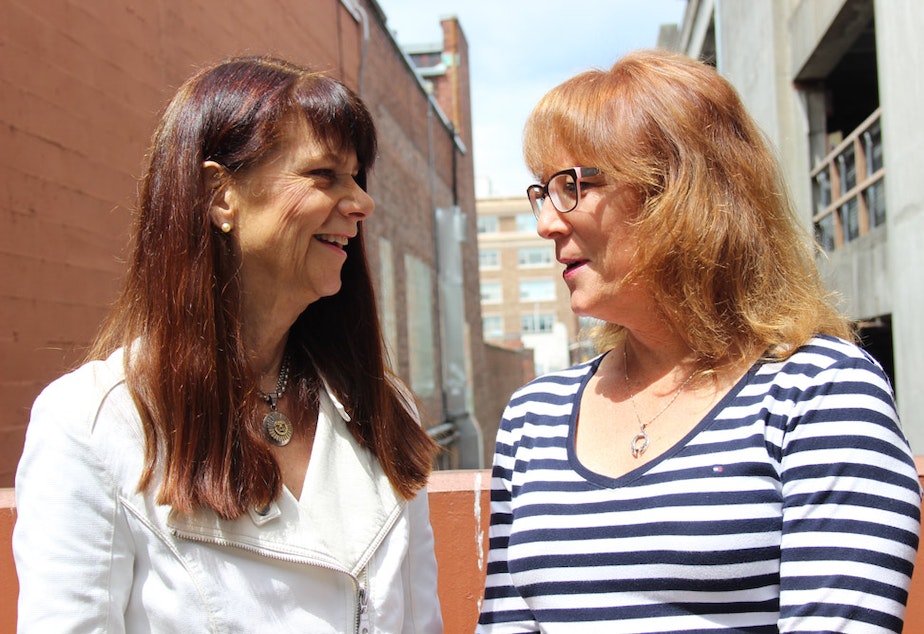