Racism is alive and well in the world, my country included and even as Canadians take pride in their progressivism there is enough troubled history which should concern us and make us rethink our feelings of superiority.

Residential schools were Canada's way of taming the "savages" whereby children were routinely taken from their parents and enslaved in institutions where their language was prohibited as was any other sign of their culture. The recent discoveries of gravesites by the hundreds was a stark reminder of how arduous it must have been and many indigenous survivors today bear the scars of their time in these places. The willful arrogance of the church was a main culprit here but then generalized society was arguably worse and regarded the native Americans with even more disdain.
Today there is a national contrition taking place which tries to "mea culpa" through governmental admissions of fault and although admirable it won't go far enough in fixing the errors of the past. So as the United States deals with its own dark past we come to terms with ours in hopes that we will never repeat it.

One always dreams that humans will evolve but these days as I look around me I sometimes have my doubts. 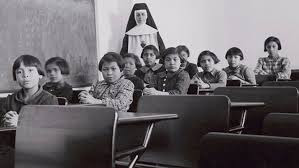