Before you accuse me of being a socialist extremist, let’s examine the concept of profit. In historical times, societies bartered for exchange of services and everyone who specialized in some commodity could trade for something else. Therefore, the farmer who owned cows could provide milk to the person who made shoes and that person would in turn prevent the farmer from walking around barefoot.

As we advanced beyond the industrial revolution, we began to have mercantile and industrialist classes who grew their businesses to much larger sizes and in turn be able to publicly be traded and hence make money for speculators whose sole purpose was to make money for themselves or their clients. Hence, the objective changed from market economies based mostly on need to those focused on making the most capital; usually for a select few.

As the United States enters what is known as late-stage capitalism as identified by the German economist Werner Sombart, you will note that one of the features of that phase is the steady monopolization of services. Rather than have many suppliers provide numerous goods and services, it falls on a decreasing number of companies to do so and hence they can corner the market and possibly even collude to control pricing. For example, in the United States only a handful of companies (at last count I believe it was five) control all of media. Amazon is another example of a corporate giant that seems to just get bigger and simply swallow the competition whole. As the suppliers become fewer, fairness falls away from the equation and eventually the entire system collapses in on itself. The profit from these giants falls into a small and select number of people who can afford their shares and their gains do not re-enter the economy but are pocketed.

So when the 'raison-d’etre' of a capitalist system is mostly to generate capital, you have arrived at the absurd because eventually you run out of road. As less and less people can afford what you are selling the system collapses which is why the income inequality gap will grow until all implodes in the US.

That this was allowed to go on for so long can be traced to cheap labour from China and other low wage countries being abundant and producing low cost goods, but as those wells dry up as these nations emerge, workers who lost their jobs in the US will increasingly have trouble affording those wares in the future. So profit makes sense if it is measured and it is allowed to re-enter the marketplace but as it falls into smaller and smaller hands your economy is cooked. 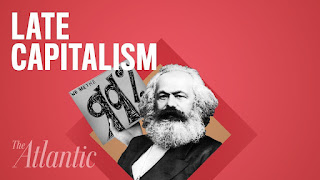