Part of me was glad when Laurel Hubbard failed to win a medal after three failed lift attempts at the Tokyo Olympics. Because, chomping at the bit would have been the right wing transphobes who would have disqualified any medal win in their minds as a tainting the woman’s category with “men pretending to be women”.

Not that there is any pleasing these people who could just say this was a weak man and a better one in female guise would eventually come along to win. But at least for the time being, we don’t need to face that possibility. Hubbard for her part was gracious and happy to have been allowed to compete and realized all too well the avalanche of trolling prompted by the IOC’s audacity to allow such a travesty of justice.

It doesn’t matter that she met all the criteria as indeed did the woman from China who took home the gold commenting no further on the trans woman’s inclusion than saying “I have nothing to say, I just respect the rules”.

Hubbard for her part did exactly the same. 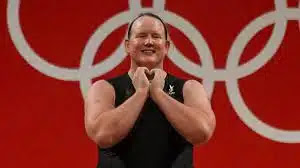