You could argue that the strength of labour unions peaked in the 1960's after which time there was a steady decline  and then a virtual death with the Reagan presidency.

As the US enjoyed a period of economic boom and massive consumerism, the need for regulations helping the working class seemed to subside. Today much of removal of government regulation and a lowering of taxes for corporations have helped move the lower echelons of society into the ranks of the working poor. As Joe Manchin and Kyrsten Sinema enjoy their time in the limelight while Rome burns there is a sense of urgency to right the wrongs especially among the more progressive voices in the Democratic party.
Most politicians are beholden to corporate interests but some clearly more than others and as the disdain for those who have little is displayed in its full regalia, people are beginning to be outraged and rightly so. Sinema in particular has shown a particular gift for obtuseness as her antics reveal much about her sense of entitlement.

The good news is that undermining a weak Biden presidency might be just the ticket to finally getting money out of politics before it is really too late. 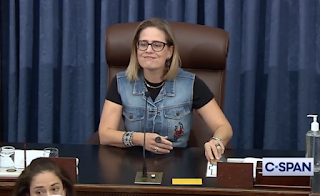