The best defense against demented right wingers isn't to argue back but is instead the leading of peaceful, happy and productive lives. After all these people aren't interested in discourse but only in prejudice and derision.

The reason that crackpot dipshits like Ben Shapiro, Jordan Peterson or Steven Crowder are increasingly up in arms is because they are losing the war on LGBTQ issues and as more people get to know one of us, the more air is let out if their indignation balloon.

The war on diversity has similarities to the civil rights movement of the 1960s in that the more ground that was gained the more virulent the attacks became from the racists who eventually lost it. While no one is suggesting that we will do away with prejudice from these types of lunatics, all we need worry about are the legal protections being put into place to prevent draconian counter measures from right wing hell holes like Texas (to use a US example of a backwater)

Greg Abbott's time is just about up there but you can bet there will be some other knuckle head around the corner in the future. So buckle up and stand your ground. 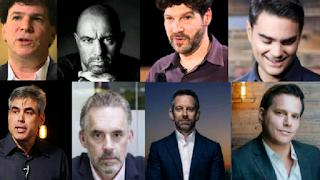