When you allow the political discourse to be dominated by cultural issues you end up with the train wreck that the Republican party has become. The “party of ideas” (I chuckle to myself as I write it) is now a cult of personality beholden to a repugnant idiot who used to be president. Meanwhile large factions want to turn the country into a Taliban-like pseudo-Christian theocracy which should send shivers down the spines of most Americans. Imagine the founders, flawed as they were, establishing a nation to escape rule of king and church only to see their own concept bizarrely corrupted in this way.

The southern strategy which helped the GOP get here is seeing it spectacularly backfire as its largely uneducated, mostly rural, and vocal base are swinging at strawmen like illegal immigration even as they lose their livelihoods to corporations who don’t have much time for them. Trumpism was the result of the cancer that had already began to take root decades before and only took someone to spread fully across the general population.

Lack of education is only worsening matters and as the population gets their information from echo chambers it will be exceedingly difficult if not impossible to repair the damage. 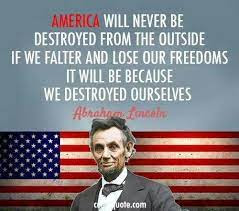