Cathedral of the Sea

Cathedral of the Sea is set in 14th century Spain where injustice through the serf and royalty hierarchy was very much entrenched. The story follows one such poor man who must fend for himself and his son in Barcelona at the house of his sister who has since married into a noble household albeit one full of treachery and mistreatment of its staff.

The father must find ways to ensure his and his son's safety and somehow survive in such dire circumstances. He manages to keep his self respect intact while he navigates the minefield of an unjust system meant to subjugate people simply trying to put food in their stomachs.
The world in many ways still operates in much the same manner only the cruelty more subtle and perhaps less perverse.
Excellent.
In Spanish with English subtitles. 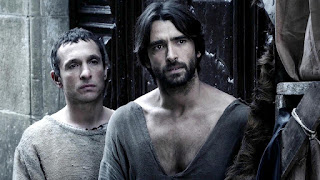