Gavin Newsom's had a brainwave which just threw a molotov cocktail not only into the Texas abortion law fiasco but also into the gun lobby and Supreme Court approaches on these two issues. If he succeeds in passing a law that allows private citizens to sue illicit weapon holders and manufacturers, he successfully sends a message to both Texas and to second amendment zealots in one fell swoop. This has so scared the gun people that some are now siding with those fighting the Texas law for fear that they will be impacted.

New York is also considering similar legislation which would mean the two most populous states in the union would have handed the right wing and the highest court in the land a constitutional dilemma. If the court allows the Texas law to stand but interferes with California and New York's laws they will be effectively caught in a trap of hypocrisy that will reek to high heaven of conservative bias.

Kudos to Newsom for his ingenuity. 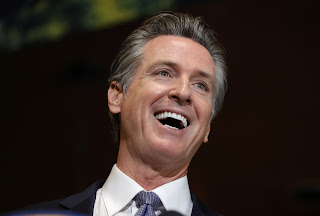