Conservatism and intellectualism tend to be oxymorons. After all, most universities tend to espouse liberal ideologies and encourage free thought which tends to broaden horizons and critical thinking; exactly what the right wing effectively opposes. If people think for themselves they wouldn't fall prey to an ideology that stagnates. Arguably,  conservatism of old did have more of a grounding in family values and ideas of altruism but as it morphed into culture war against immigrant hoardes and failed to deal with structural racism within its ranks, it began to attract a more unsavory type of acolyte. The movement became one for the uneducated and the reticent for advancement.

David Brooks, who is arguably one of the last traditional conservatives in the United States, recently wrote a piece in the Atlantic where he bemoans what happened to the movement he one time admired and now deplored that it has been lost to a caustic Trumpism. The movement now takes its cues from a vengeful village idiot and wallows in the mud along with him. A New York Democrat with no interest in any movement except in his own personal advancement now holds an entire party hostage.
It would be wildly amusing if it weren't actually true. 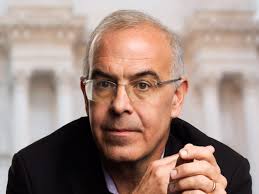