The Hand of God

The Hand of God is a coming of age film. Set in 1980's Naples it tells the story of Fabietto who is enamored of Diego Maradona and football and loves his parents (particularly his mother) who he loses to an unfortunate accident. He is also infatuated with the lovely but tortured Patrizia.  Surrounded by a crazy extended family he meets people who prod him along the way towards finding out who he is and what story he wants to tell as he imagines a life in the world of cinema.

In some ways he reminds me of young Holden Caulfield in The Catcher in the Rye as he aimlessly wanders his native city while pondering where he belongs in the world. The Fellini influence here is undeniable.
In Italian with English subtitles and highly recommended :) 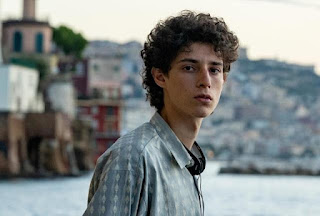