How can someone who is equal parts dimwit and malevolent be elected president? I think the answer lies in the disillusion with a system of government which the populace felt deeply needed a shakeup. Admittedly from watching interviews one realizes that significant swaths of the electorate are even dimmer than Trump but it's fair to say most Americans could see through the used car salesman etiquette and the phony smile doing its best to conceal deep seated anger; they just figured they'd take the chance anyway.

Trump is a twisted psychopath raised by a smarter version of one and his role in trying to unravel democracy may one day prove prophetic, but for someone this incompetent to be given the reins of power you need to realize that the system is hopelessly broken.

Many Americans shuddered when he was elected but not enough to inspire confidence and, after a disastrous 4 years, the fact so many still want to see more, should be deeply concerning. 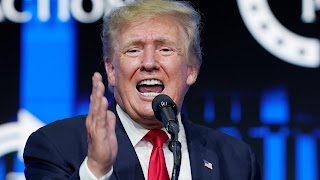