"Denial" is about deniers of the holocaust and the filing of a libel suit by one them called David Irving. His lawsuit is against Jewish historian Deborah Lipstadt played brilliantly by Rachel Weisz who needs to prove that it all happened.

The courtroom drama is compelling and made even more interesting by the fact that the burden of proof is on the accused. She carries ahead even as she is asked to settle by community leaders who don't want Irving to be given a platform to spew inaccurate accounts of history.
Tom Wilkinson also gives one of usual fine understated performances.
A relevant film in this age of denial. 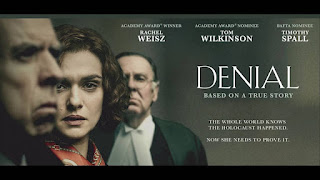