You will notice that transphobes will often use the term “transgender ideology” because it is easier to vilify a movement than individuals who just want a chance to live in peace. Trans people aren’t going to disappear because they’ve always existed, but if they can be lumped together into a collective that deliberately threatens traditional institutions and moral values, they can be held back and put in their place lest they ask for something outlandish like basic human rights.

Trans people are as intelligent as anyone else and understand basic biology, but they don’t think as a monolithic structure and there is much varied thought within their ranks (some of us even eat their own young to hold themselves up to a purity test). Using the issues of access to women’s spaces and women’s athletics has been the latest demonization and even if no evidence exists for being afraid, there are plenty in the public willing to listen especially if they are motivated by their own prejudice. I won't die on the hill of competitive sports (although there is so much misinformation out there and even hormone levels and strength vary radically between genetic women) but the idea that trans people might be infiltrating women’s spaces for predatory reasons takes the cake. "Use any argument and make it stick" seems to be the modus operandi of the scoundrel and helium-voiced and fast talking Ben Shapiro is one of them.

In the end, trans people are individuals looking to survive with solitary and unique problems. There is no agenda or movement but don’t tell that to a right-wing fringe slowly but surely losing the war as well as their collective minds. 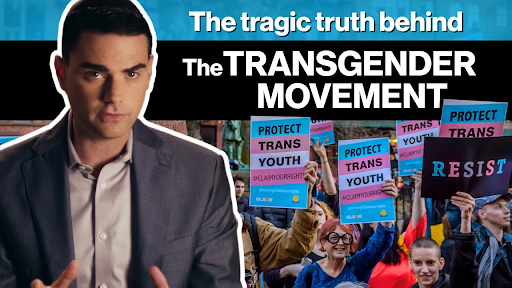