Being safe in a career is what I was taught growing up which seemed to extend to my life in general. Hence, I have tended to be conservative and chose a profession based on being able to make a comfortable living rather than being passionate about it. It was a different era back then where much artistic aspiration was sacrificed at the altar of pragmatism and, while it afforded me a certain safety net and raise two kids, my job did not inspire me in the way that my love of music or art did. In fact, few people of my generation and even today could say that their job was their passion.

I don’t bemoan my choice, but I do like the less structured world of today being forced to examine the corporate structures we saw as an inevitable part of an ordered life. The institution as provider of what society needs proved to be less of a good choice given what we know now went on behind closed doors there. We can see now that those machinations profited the few and those lower on the totem pole saw their jobs lost to outsourcing including in professional fields like mine, where lowering of costs became the ultimate barometer of success.

I have written here before that we will need to remake the work/personal life structure because those coming behind are seeing that working for 30 years for someone else only to see a meager pension (if at all) might not be the best way to spend such a significant portion of your existence. 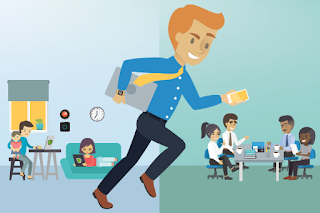