The results are as stark as they are clear: people who are unvaccinated are ending up in hospitals in much larger numbers and the graph below for my province of Quebec speaks for itself. If by now you have been basing your hesitation on social media misinformation, I suggest you look at the figures and think again.

I am an engineer and would like to think an epidemiologist would trust me to do my job. For some reason however, some people think they know better and can do an epidemiologist's. This level of ignorance is both remarkable and dangerous.

Rand Paul recently attacked Anthony Fauci once again in senate hearings and talked of natural immunity to be gained by simply allowing Omicron to run rampant. While this immunity will eventually be reached, in the meantime a great many lives will be needlessly lost. Paul who is educated as an MD is either an idiot or he is playing to his base and I am opting for the latter while also realizing he appears to not the brightest bulb on the planet. 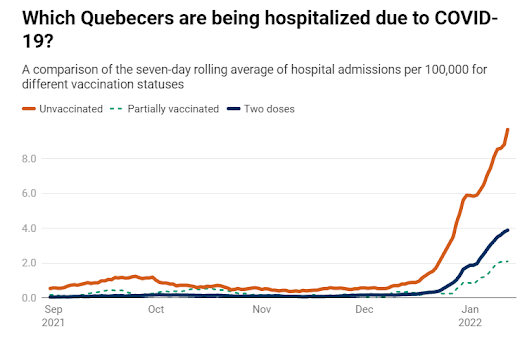