Take the money and run

"There are lots of reasons it's hard to be hopeful at the end of this year, but as we put a cap on 2021 and look ahead to all that 2022 may hold, there is indeed cause for optimism.

One vital spark lives in Amy Schneider and her stellar, history-making "Jeopardy!" run. Schneider, the first transgender person to qualify for the game show's Tournament of Champions and the top-winning female in the show's history is also the fourth-best winner ever, gender agnostic. With 20 games won under her belt, she is not yet done leaving her mark on one of television's most popular and intellectually challenging shows.

TV is the great escape, but it's also a reflection of our shared reality. Schneider represents how far transgender people have come in terms of gaining a seat at the table.

In this case, Schneider has not only achieved greatness but surpassed the odds, earning more than three-quarters of a million dollars in game show winnings and counting. It is a high mark for LGBTQ+ visibility for those who identify in the acronym and allies alike, and a clapback to the haters. Queer and transgender people don't just exist. We thrive. We contribute to society. We are real and we are here and you cannot legislate us back into the shadows.

There is something particularly uplifting, magical even, about Schneider's winning run. It feels good to tune in each night and cheer her on. It is cathartic to root for a trans champion at a time when efforts continue to try to block or roll back the rights of transgender people in the US.

Having someone to root for, whose wins we can celebrate, is something we can all relate to more emphatically and empathetically in light of the surging Omicron variant and the murky immediate future it portends. Indeed, Schneider is an inspiration not only to transgender and queer people but to females of all ages and allies of social justice and equality as well. Not to mention people who just love "Jeopardy!" and can find fellow feeling with Schneider, who has been meticulous in paying homage to the winning women who came before her.

Schneider's success feels like vindication for those of us who have too often been confronted, at work or in our personal lives, with entitled or condescending men, proclaiming to know the truth and what's best for the rest of us. No, mansplainers. Step aside. Amy Schneider knows more than you do.

As if the metaphor of Amy Schneider as a shining beacon of hope couldn't be extended any further, her grace as a record-breaking winner is paramount. When the previous record-holder Larissa Kelly tweeted at Schneider to congratulate her, Schneider humbly replied, "Thanks so much, I'm honored to be in your company, and I look forward to someday watching the woman who beats us both!" If that isn't a lesson in civil discourse for our members of Congress and our local elected officials who pander to the disinformation demographic for fear of retribution, I don't know what is.

There are poignant parallels between Schneider's triumph in this gender-inclusive mental sport and our strain to find the bright spots in an otherwise dark year. As we close the door on our second full year of pandemic life and step into an even more uncertain 2022, we yearn to feel optimistic for what lies ahead and to begin on a higher note than circumstances seem to allow at present.

Omicron is exploding around us; the hospitals are filling back up again and we're still arguing about whether scientifically proven aids like masks and vaccines are real. Let's not even get into climate change, the insurrection or the perils that haunt our democracy.

With all this darkness around us, it's no wonder the internet is lighting up at Schneider's winning streak. An #AmySchneider hashtag on Twitter gives me hope (Like this one: "Larissa and Amy are my heroes!)

In a year with the most recorded murders of transgender people, seeing such a positive trans role model not only succeed, but succeed in the game of knowledge and prestige on such a well-reputed mainstream stage, is the type of exposure that will help broaden understanding and acceptance of trans people.

What's more, Schneider -- by shining a positive light on "Jeopardy!" after a year of controversy for the long-running show -- is serving as a symbol for facts and truth and showing that smart is winning. She is a manifestation of the antidote to this era of distrust and disinformation. I'll take "facts matter" for $200.

Between the seemingly never ending Covid surges, political division that is only expected to intensify as we round the corner into 2022 towards midterm elections, let us rally around this moment to celebrate someone who is breaking records and demonstrating that we can defeat the odds, embrace knowledge as power and achieve greater heights together.

And as we gear up for what will likely be another fierce battle legislatively (with 2021 the most anti-trans year yet in the state houses and the hatemongers already stirring the pot for 2022) for transgender and LGBTQ+ people as well as other marginalized communities, let's all channel our inner Amy Schneider. Whether it be voting rights, abortion access or whatever other curveballs may get tossed our way, let's face the opposition with polite cunning -- then promptly and swiftly outsmart them to take the money and run" 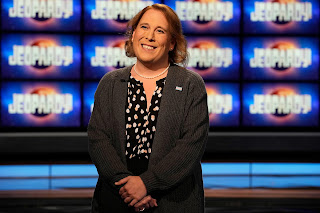