Upon first being exposed to Jordan Peterson who is exactly my age, there was instant dislike. He was on a YouTube video some years ago explaining to University of Toronto students why he wouldn't use the preferred pronouns of a young transwoman. His fame grew from there and afterwards there he was testifying against Canada's bill C-16 which sought to engrain and fortify the human rights of all Canadians including of course those in the LGBTQ community which Peterson clearly has a problem with. His premise being that he won't be forced into anything he doesn't agree with.

His adoring fanboy club saw him as the perfect self help guru only that in his recent years he has been personally unraveling publicly on a series of right wing shows and proving that there is something unstable about him. So in many ways I feel vindication even if I don't wish anyone ill will. Peterson's arrogance proved to be his undoing and now having left Twitter in a huff over the backlash received when he ridiculed a plus size model on the cover of Sports Illustrated and turning into a left wing indoctrination admonishing, he once again demonstrated his emotional volatility. When you wade into the public arena with such ferocity you need to be prepared for the ensuing scrutiny.

Also, when you espouse an agenda that is dismissive of others people's rights there is usually something deeper there regarding your own psyche since a secure person has no need to harm or belittle anyone else. 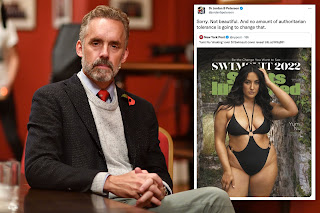