If you are trans and like me have made the firm decision to not physically transition, there is something which has helped me immeasurably which is to think of myself primarily as a human being rather than a gender stereotype. The trappings of gender are everywhere and during my era it was black and white with no nuance to speak of. As a result, I fell victim to gender as an important boundary which cast a shadow on everything I could be or could not be.

Today many things have changed, but many of us who are older still carry vestiges of that pervasive programming and if we do not transition fully, we may feel caught in a netherworld with pressures to take a side. Abandoning trappings related to gender, freed me from feeling in any way inadequate and espousing who I am as an individual.  Hence thinking outside of a predetermined box is always the way to go even if ultimately you do decide that a medical transition is for you. If your dysphoria is worse than mine I wouldn't blame you in the least.

Acting according to your internal compass will always guide you in the right direction even if that means disappointing others who don’t see your need to be whole. Something which is ultimately their problem and not yours. 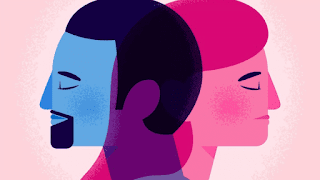