To say I am not a summer person is a massive understatement and my body breaks down refusing to cooperate. I have always tried to understand those who say to me unabashedly "Oh I love the heat" unless perhaps they mean lounging by a pool all day like a mollusk. For me being able to walk, bike or play tennis are hampered by the oppressive heat of a Montreal summer with the only respite my being my status as an early bird and taking advantage of whatever coolness which might be offered. Thus I spend summer waiting for the rescue of a fall which is increasingly hot as well.

My body's set point has always been such that I tolerate cold far better than the heat and although I don't love those winter days of minus 20C, I will take them over 30C plus the accompanying humidity. I remember years ago being in our Tampa office in June and asking the employees what they did which was ostensibly run between an AC office to an AC car; a reality which at least made me appreciate that others had it worse.

Climate change will only worsen things of course until we figure out how to stop screwing up the planet. 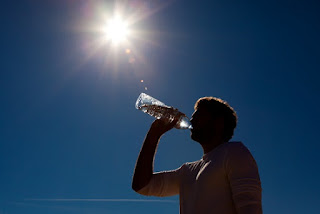