I live in a walkable neighborhood that was mostly built up between the end of the 19th century and the 1950s which means that it was conceived more for people than cars. The main commercial street (pictured) goes fully pedestrian until October and as a result it is full of activity and full of restos and cafés many with outdoor terraces. The area is undergoing gentrification yet there is a great balance of demographics here that doesn't favor any one group. This vibrancy is what keeps the neighborhood buzzing with all age groups and income brackets.

Building neighborhoods like these is now illegal because they mix commercial and residential spaces which is a shame because it makes neighborhoods far more liveable and less car dependent. In fact, my car disappears on Tuesday and then it's car sharing. 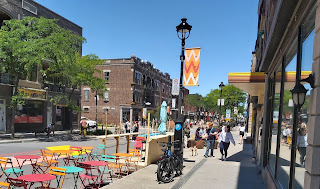 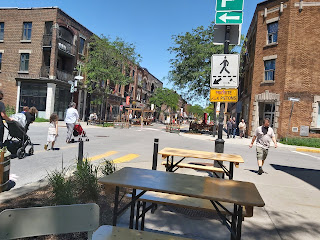