They've opened up a Premiere Moisson franchise in my neighborhood. Located in an old turn of the 20th century bank building it has plenty of character to spare and another step in the gentrification of a neighborhood where one didn't go when I was living in NDG in the 1970's. It's a higher end pastry and coffee shop which tends to be located in the better parts of the city.

Now it's bidding wars to purchase here with some of the older residents being priced out through what they are calling "renovictions". I know of one woman who has lived here all her life and is getting a large rent increase although in fairness they were dirt cheap for the longest time. Still, people on social assistance or working low income jobs need to live somewhere and this will be an increasing challenge in the era where the middle and working classes have been falling off a cliff.

Today you are more apt in my old NDG stomping grounds to see the Range Rover owner parking right next to the panhandler as a sign of the stark contrast of our times.
Take a guess who I sympathize with the most. 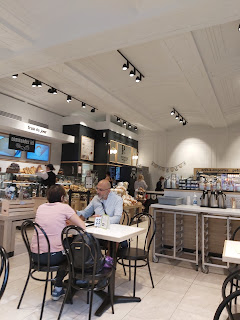