Even if Liz Cheney stood up to Trump over his election fraud and coup attempt, she still voted with him something like 93% of the time and so while she could appear to some to be courageous, her agenda like the rest of the GOP, is essentially toxic. Therefore before lionizing her in her primary loss we should remember her stance on many issues runs contrary to American public opinion. In fact the Republican agenda is deeply unpopular among people who aren't extremist which generally equates to socially progressive and university educated folk.

The appeal of the GOP in red states hinges on wedge issue red meat which banks on the spectacular lack of education on these issues and Cheney is no different in that regard. Hence, before erecting a statue in her honor, let's remember that simply standing for the truth about a coup attempt doesn't exactly make you Joan of Arc. 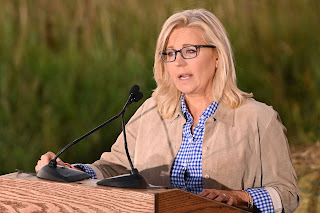