Do the right thing

That Trump is a repulsive figure isn’t in question. But for some who feel disenfranchised he has come to represent the everyman with maybe not the best pedigree in the intelligence department but certainly plenty of false bravado and posturing to make up for it. Those of us who just see a scumbag will never get it and I have tried to look beyond the distasteful manner of speech and juvenile behavior to attempt to see what someone else does all to no avail.

The raid on his home in Florida shouldn’t be surprising because the laundry list of crime is long but when you have enraptured millions with PT Barnum-like aplomb, the flock will dive off the nearest ledge for you if you asked. I must credit the DOJ for finally following the evidence and for not allowing the politics to get in the way of investigating what is clearly the most criminally corrupt president in the nation’s history.

The right wing media is too far gone as are the members of the base who will defend any level of criminality but those who understand what must be done cannot be swayed by political climate and simply do the right thing.

Even a weakened and wounded democracy demands it unless of course you think autocracy preferable. 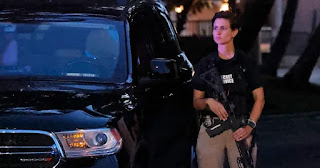